Welcome to the Slicker Family History, a website that was started nearly three years ago with the initial purpose to discover, preserve and share the family history of Philip Slicker and Magdalena Friend and their descendants.

I published the first two stories in October 2016 narrating what little is known of Philip Slicker, our ancestor who made his way from Germany to the United States in the nineteenth century. Since those initial postings, I posted stories and timelines – based on published documents – on the lives of Magdalena Friend Slicker, John Slicker, Melissa Mansfield Slicker, and Nancy Mansfield Haney. You can view how these people are related in the family tree chart shown below.

While writing the two part story on the life of Nancy Mansfield Haney and contemplating adding stories narrating the lives of John Mansfield, Nancy’s first husband, and James Mansfield, Nancy’s father, I wondered whether I was getting off course with the purpose of the website – that of sharing, preserving and collaborating on the history of the Slicker family.

But then I realized, that all who descend from Samuel John Slicker and Ethel Hardwick, also share other family lines. These other family lines are a part of our rich history and contribute to who we are as Slicker descendants. So, in addition, to writing about our Slicker family history, I have decided to expand the stories on this site to include the other lines. The family tree chart (pedigree chart) for this site has expanded as shown below. 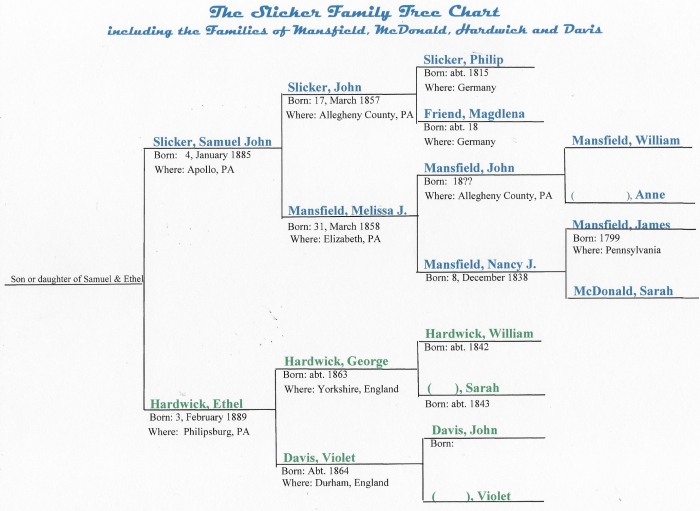 Is This My Family Tree?

If you have not seen a chart like the one above and are not familiar with your family history, this family tree chart may appear a bit confusing. Your first question may be “Is this my family tree?” To answer this question, you must determine if you are a descendant of one of Samuel’s and Ethel’s children. Samuel and Ethel had five children. They were Violet Florence, Leonard Floyd, Lawrence Austin, John Clifford, and Lester Samuel.

If one of Samuel’s and Ethel’s children is your parent, grandparent, or great-grandparent, then this is your Slicker family tree. Place the name of the ancestor on the line titled “Son or daughter of Samuel & Ethel. The tree can be extended to the left to include you and the other generations, if there are other generations, between you and your Slicker ancestor (Violet, Leonard, Lawrence, or Lester). Now you are ready to read the tree.

If you follow the Slicker line, begin with Samuel John. Samuel’s father was John, and his grandfather was Philip. Philip’s wife was Magdalena Friend. John Slicker‘s wife was Melissa Jane Mansfield.

You can also follow Samuel John’s maternal line beginning with his mother Melissa. Samuel’s grandfather was John Mansfield who died at Camp Sumter, Andersonville, Georgia near the end of the Civil War. Samuel’s great-grandfather may have been William Mansfield. I say may because I don’t have any document to prove this relationship, but I have good reason to believe it is correct.

As you look the chart over, you may notice that Philip Slicker and Magdalena Friend Slicker came from Germany. George Hardwick and Violet Davis were born in England. But what about those Mansfields’ lines? These family lines have proved to be a challenge. I have only one record documenting the lives of William and Anne Mansfield, parents of John. This is the 1860 census. This record shows that William and Anne were born in Pennsylvania. William and Elizabeth Mansfield, parents of James Mansfield, however, were foreign born. But their home country is still unknown at the time of this writing.

If This Is Your Tree

If you have identified this Slicker Family tree as your family tree, then you may want to take some time to explore the family narratives and timelines presented on this site. To begin, click on one of the links in the paragraphs above or use the Categories menu located on the right-side of your screen. You may have to scroll up a bit to find the Categories menu.

If you have any questions or would like to add information to the stories, feel free to ask your question or add your information in the “Leave a Reply” section. You may have to scroll down to find this section.

This site uses Akismet to reduce spam. Learn how your comment data is processed.

The Who and Why of this Site

Hi. I'm Robin, the author of this blog. I and my partner in genealogy, Mary, aka my mother, have accumulated a ton of family information since we began our exploration into our family history back in the early 90s. This website is a method to preserve our findings and to share our discoveries with others who may be interested. This is my invitation to you to have a look around and to visit often. Comments are welcomed.